Aiden Connelly is tired of the frenzy in Chicago, and is now trading it for a quieter life in Avalon, taking his little family with him. Isla isn’t happy about leaving her old life behind, but like Aiden, she knows this is their last chance of getting their marriage to work out.

On his first day Aiden receives a simple case; a young woman murdered her husband. She’s standing on trial, and is expected to get a death sentence. An open-and-shut case.
Or maybe not. Because the more Aiden starts digging around to find the truth, the more he discovers that a small town isn’t always more safe than the big city and that small town folks guard their own secrets better than a dragon protects it’s golden treasure. Finding what’s real and what’s a lie in this nest will be harder than Aiden thought.

I really, really liked First Fall from Carys. She has created an unique story that pulls you in and doesn’t release you until the last page is turned. The further I read, the deeper I got, and the secrets that was revealed was… oy… I thought I had it figured out. I knew who the bad guy was, and yet…. Carys threw me a curveball that left me hanging in the air with open mouth and going WHAAAT?!

Have you grown up in a small town? I have. There’s a special… atmosphere in a smaller town. Everybody knows everybody, they’re usually very tight knitted together. Which can be a good thing – it can also be hell for newcomers to get into the community, because frankly, not everybody is nice and friendly to new folks in their town. It usually brings changes, and changes is something that most people doesn’t take as a good thing. Anyways, straying from the subject a bit… Carys has captured the essence of a small town beautifully. She made it feel so alive, made me feel like I was a part of it.

Aiden is a complex character and yet… he wants something so simple… Peace and quiet. Time with his wife and daughter, a barbeque, friends over Saturday night, enjoying a good, cold beer after work. Small stuff, but things that makes life good. He’s also a very stubborn man, someone who never gives up without a fight, especially if there’s injustice involved, he’s a modern knight in a suit instead of shining armor.

First to Fall is the first book in Carys Avalon Series, and I can’t wait to read the next one, to get deeper into the town and its secrets, something tells me we’ve just seen the beginning of the nasty things lurking underneath. 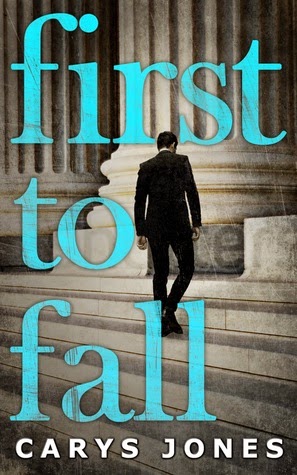 Aiden Connelly’s first case will be one he’ll never forget.

Lawyer Aiden Connelly has traded the frenzy of Chicago for a slower pace in sleepy Avalon – and his first case appears to be as open-and-shut as he could hope for. Hired to defend a local ex-beauty queen accused of murdering her husband, he’s confident that he’ll have the case closed in record time. But below the surface lurks a darker truth…

Suddenly, a quiet backwater has transformed into a dangerous pressure cooker. In a town where everyone knows everyone, gathering evidence should be easy… but the harder Aiden searches, the more he appreciates how tangled this net of loyalties is. And as he digs deeper, Aiden begins to realise that his very first case in Avalon could be the beginning of his undoing…

You can buy First to Fall HERE 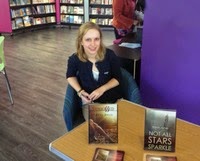 Carys Jones loves nothing more than to write and create stories which ignite the reader's imagination. Based in Shropshire, England, Carys lives with her husband, two guinea pigs and her adored canine companion Rollo.

When she's not writing, Carys likes to indulge her inner geek by watching science- fiction films or playing video games.

She lists John Green, Jodi Picoult and Virginia Andrews as her favorite authors and draws inspiration for her own work from anything and everything.

To Carys, there is no greater feeling then when you lose yourself in a great story and it is that feeling of ultimate escapism which she tries to bring to her books.

You can find Carys here: