WARNING: If you haven’t read Angels Dawn do NOT read Fight for Dawn! This is NOT a stand alone!

That said, I can move onto the review….
Fight for Dawn takes off right where we left her in Angels Dawn. Broken hearted, a mess, lonely and… well Dawn is devastated. She lost…. Everything in one night, and in real life, you can’t press a button a restart the game. It goes on even if you feel you can’t move along with it. That’s how Dawn feels like.

Dawn’s mother insists that she has to go to Italy, just like they had planned, and so she does. But Italy has more to offer than meets the eye and soon Dawn finds herself smiling again, but will it last, or will Gabe’s secret break her too?

It is clear to see/feel from the beginning that Komali has a tight grip on this story, the flow she found in her story telling from the end of Angels Dawn has definitely found its way to Fight for Dawn and it is a pleasure to read!!

Komali dishes up with new surprises and twists in her plot that you still don’t see coming. The characters are a delight to read, and I giggled more than once due to Dawn and Gabe.

Komali also broke my heart. No, I won’t tell why. Or how. That will be too spoilerish, and I don’t do that. Just be prepared to bring the tissues forth, fair warning.

As much as I enjoyed Angels Dawn, I adore Fight for Dawn. Komlai truly shows how much she has grown as an author and her potential is absolutely amazing. Can’t wait to read the conclusion to this exciting trilogy!! 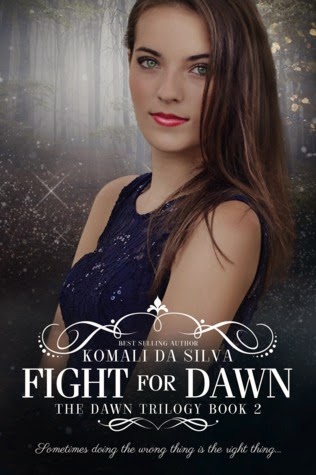 She should've known better than to hope her life could be normal after losing her best friend Nate. It’s hard enough to deal with the loss but now she “sees” him everywhere. Add that to meeting Gabe, the new guy who sends her heart racing and Dawn is certainly spinning. It’s almost enough to make her forget the demons that lurk in the shadows.

Unfortunately the many distractions aren’t enough to purge Angelo from her broken heart. Her hopes of ever being with him again have been dashed. He’s moving farther away and there is nothing she can do to stop it.

Soon the demons Dawn wanted to forget about will remind her of their presence and she’ll have to abandon everything else. Not only is her life in danger, but the lives of everyone around her as well. 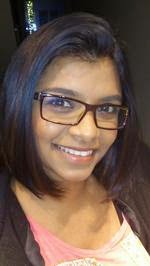 She started writing as a teenager but never took it very serious, because at that time her love for basketball and track and field sports was much stronger.
At the age of seventeen she moved to Switzerland with her sister to live with their father. Komali has a degree in Insurance but is dreaming of having her own book cafe one day.

She started immortalizing her words on paper in June 2012. At that time what she didn't know was, that she was pregnant with her first baby.
After her daughter Amália Ishwari was born, Komali finished her debut novel Angels Dawn.

Komali now lives in Bern Switzerland with her husband, daughter and two cats.

Stay tuned on her author page to find out more about her next adventure in Dawn's world.

You can find Komali here: