Oh how I love Raine and her cousin Phaelan! Adore beyond what I ever could be able to describe! I found Lisa Shearin and her Raine Benares series after her second book; Armed & Magical had been released and The Trouble With Demons was close to come out. I fell hard.

There’s something absolutely magical about the way you’re pulled into the story, and how it refuses to let you go. Honestly, I have lost count of how many times I’ve re-read the entire series, and something tells me that I’m about to dive into it again.

Lisa has a special way of making me turn the pages faster because I just have to know what happens next – even though I curse myself for doing so, because I want it to last longer, she makes me smile due to the humor delivered, the witty comments, the bite me remarks from Raine or Phaelan – or anyone from her novels really.

I always feel at home sitting down with one of her books, I know I will love it, I know I will smile, laugh, gasp and shiver in anticipation for what will happen next.

For those of you who have been a Raine Benares fan for ages (like me – or longer than me), you might have wondered about Tam and Raine’s first meeting. Or maybe you wanted an explanation for the curse Raine used against Ocnus Rancil.

I know I wanted to know for a long time.

Was it worth it?

Dark mages, illegal games, my favorite elf and favorite goblin, a trip back to my favorite series, Raine running straight into danger (again), Phaelan doing what he does best…. Well, what’s not to love?

Seeing Raine again after what feels like…. Well, too darn long time that’s for sure, I loved stepping back into the world of Mermeia, taste the danger lurking underneath the surface and the thrill of following Raine on her adventure.

A gobling woman have come to seek help from Raine; her husband have been gambling a bit too much and this time, he overstepped his boundries. He took something from her that was priceless for her; her grandmother’s ring. But when Raine starts digging deeper into the case, things are revealed that points toward something more sinister than a regular gamble at a card game. Suddenly time is short for Raine and her friends, because not only will they have to stop the game, retrieve the souls and get them back to the children – they have to do it before sunrise. No pressure right?

Lisa did exactly what I hoped she would; pulled me back into her world again, showed me that not ever secret has been exposed, that there are still things we don’t know yet as a reader – and I love her for it. She made me laugh, made my tummy turn for the children, made me want to slap Tam and then hug him a little later – basically…. I became a part of the story, which is the best feeling you can get as a reader.

Wild card is a prequel to the Raine Benares series and can be read alone, but you will definitely not regret picking up the rest of the series. If you like the humor that Lisa delivers with Raine, you should also try her SPI Files with Makenna Fraser. My name is Raine Benares. I’m a seeker, a finder of things lost and people missing. I’ve never had to do both in one day, or had this many lives at stake—including mine.

The search for a missing ring leads me to the abduction of eight magically gifted children. Their souls were stolen while they slept, and unless I find those souls by sunrise, their bodies will die.

Both cases have one thing in common—they’re linked to a goblin secret society high-stakes poker game, whose members are practitioners of the blackest of black magic. As a seeker, I can track those captured children’s souls, but to spring them will take magic I haven’t got.

That's where Tamnais Nathrach comes in. He's the seductive embodiment of sin itself. He's also a goblin dark mage with an even darker past, the owner of the city's most notorious casino—and the only person with magic enough to reach the kids in time.

Why are the most dangerous predators the most beautiful?

The stakes are high; the odds of success are low. And I'm betting with my life—a life I'll have to trust to a darkly tempting goblin mage I just met.

You can buy Wild Card HERE 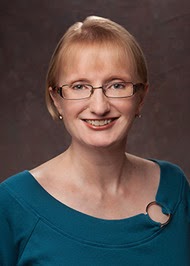 Contrary to popular belief, most authors do have day jobs just like everyone else. Lisa’s happily freelancing for an advertising agency as an editor and proofreader. In her previous corporate life, she’s been a magazine editor, advertising copywriter, and writer of corporate marketing materials of every description.

Lisa is the national bestselling author of The Raine Benares novels, a series of six comedic fantasy adventures. Her next series—The SPI Files—is an urban fantasy that’s been described as Stephanie Plum meets Men in Black. The second book in that series -- THE DRAGON CONSPIRACY -- will be out on January 27, 2015.

Lisa is a voracious collector of fountain pens both vintage and modern. She lives on a small farm in North Carolina with her husband, three spoiled-rotten retired racing greyhounds, and enough deer and woodland creatures to fill a Disney movie.

You can find Lisa here: