Review: Thimble Down by Pete Prown

This book was given to me for free in exchange for an honest review.


Thimble Down is a wonderful story, especially if you’re into Tolkien and the universe he created.
Dorro is the Book keeper, librarian of a small town (Thimble Down) filled with hobbits/halflings. Normally not much happens in the town, the day is usually filled with small things and that’s just how they all like it. But then… something does happen. A whole lot of things actually.


First a young lad is found in Dorro’s cellar, which is highly unusual on its own. Then Bing Rumple shows up with his brother and a friend. They claim they helped some elves and was awarded a brooch and some beautiful knives as a reward, only later Bing turns up dead with an elven knife in his back – at the same time as a hunting party of elves turns up, claiming that their precious brooch was stolen and demands to have it back.
The sheriff of the little town has his hands full and  hires Dorro in as a consultant, hoping his quick mind will find the missing pieces of the puzzle BEFORE the elves starts turning the town upside down in their search for their brooch.
Now the question is…. Will Dorro be able to figure out the mystery before someone else winds up murdered? And where does the young lad Wyll Underfoot fits into it all?
Let me start by saying that I love and adore the universe that Tolkien has created. I’m not entirely sure if Thimble Down is a direct fan fiction, but non the less, I enjoyed the book immensely. Seeing the little town being disrupted by something so hideous as a murder, having their meals being late (oh, the horror) and seeing the brilliant mind of Dorro Winderiver was amazing. Pete really has managed to capture the lifestyles of the hobbits and add his own twist to them.
That said, I also had a little trouble connecting with the characters, Thimble Down didn’t manage to capture me entirely for some reason. I have tried looking at it from different angles, but just can’t figure out the reason why. The writing is good, the language flows easily, the characters are wonderful and I laughed several times due to the antics from some of them, the action was really good as well, and yet... I had no trouble at all putting down Thimble Down, none. Not even mid-chapter, which is normally not something I do.


That said, I would still recommend Thimble Down for people who loves a good adventure and Tolkien’s world. 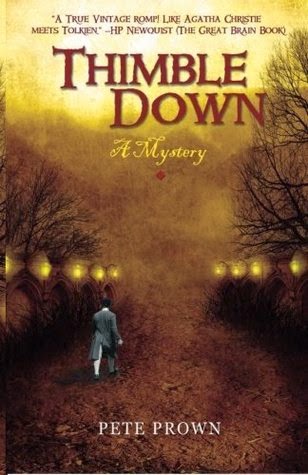 THIMBLE DOWN is a country village where death and malice lurk the quiet lanes. When the vile, drunken Bing Rumple acquires a gem-laden treasure, violence begins to follow him everywhere. Where did Bing find such a precious jewel, and worse, is someone willing to kill to possess it? In this fast-paced adventure, the village bookmaster, Mr. Dorro, and his young companions Wyll Underfoot and Cheeryup Tunbridge are in a desperate race to find the answer—before death comes to Thimble Down.

You can buy Thimble Down here:

You can find Pete here: