Amy is in hiding after the escape from the kidnappers. Her mother and Amy got away, but they have no idea where Amy’s sister are. If she escaped, or got caught as well. Amy’s mother sets out to find her other daughter, cautioning Amy to stay safe and not poke her head up too high. Which wasn’t on her agenda. But then she ran into her long lost father, finding a new friend; Duncan, learning more about her abilities, getting shot at, and the prophecy.


This is just an itsy bitsy part of what happens to Amy in Unelmoija: The Dreamshifter. Since I really don’t want to ruin the reading experience for anyone, that’s all I’m telling.


I was caught into the story fairly quickly, and it wasn’t hard to follow at all. Thomas McKnight (Amy’s father) is special, and there are more darkness in him than he wants to reveal. Amy is only beginning to understand what she is capable of as a dreamshifter, even though all the odds are against her – not to mention her father’s enemies. Duncan is a witty input to the story. I’m still not entirely sure what his purpose is exactly, besides the fact he was at the right time at the right spot. He and Amy does seem to get along very well, despite the fact they’re opposite power wise to each other doesn’t bother them. Quite the contrary.


I did like Unelmoija: The Dreamshifter. I had a hard time putting down the book, and to me it is a solid and wonderful beginning to a new series. However, I didn’t feel like I could connect 100% to the story, and I can’t really put my finger on why. Maybe it was because there really weren’t any huge surprises in the plot to me – there were surprises, yes, but no one truly knocked me on my ass. Unelmoija is well written and I am going to read the sequel; Unelmoija:The Mindshifter. Just to see where the story takes me. 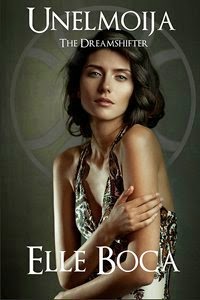 Ready for a new kind of urban fantasy? In Unelmoija: The Dreamshifter a pretty yet ordinary young woman's life is transformed beyond her imaginings when a traumatic incident changes her forever. An unexpected encounter with the father she never knew and a mysterious man that repels and attracts her at the same time leads her to discover she's not who she thinks she is. Amy, unassuming, intelligent, with newly acquired superhuman skills, lives in a historic Miami waterfront estate. She’s about to discover that a safe location, youth and special abilities may not be enough to protect her from whoever wants her dead.
You can buy Unelmoija here: Amazon

Elle is the author of the Weeia urban fantasy series set in Miami, Florida in the United States. Growing up the only child of a monkey mother and a rabbit father she learned to keep herself entertained and spend time reading. Published ebooks are Unelmoija: The Dreamshifter and Unelmoija: The Mindshifter. Look for Unelmoija: The Spiritshifter soon.