Good Morning! My name is KC Sprayberry. Sabina Bundgaard of Sabina's Adventures in Reading has let me hijack her blog today. The purpose is to tease all of her very dedicated readers with information about my soon-to-be-released YA coming of age novel, Take Chances.

1. Introduce yourself to our readers. What should we know about you?

Hey, Michael Taylor here. I'm a photographer – of kids in action. Kind of like I was back in high school. Give me a raging river and a boat, the side of a mountain, hitting a home run, or making an end zone run, and I'm there. Love what I do, but tell you what. You'll never believe this. There's this girl I've loved since I was a senior, and she was a sophomore, but I didn't dare get close to her until she was eighteen.

The reason for that? Oh, you really want to know? Well, it was her mom. She caught me watching Julie one day while we were all playing basketball in Tom's driveway. You would have thought Lacey caught me undressing Julie in a public park, the way she went on and on about men like me. I'd just graduated Landry High, didn't have a clue what I wanted to do next, and well, I was just hanging out with my buds.

Now, Lacey, she decided that she didn't want me around, so she told me to get out town or go to jail. It took me two years to come back, but I'm glad I did.

2. What do you think about the author? Tell us everything. We want to know.

Did a fab job. I'm not much of a writer, but this lady is like Julie – just loves writing. And calling me a pirate hottie. Wow! I'm blushing just thinking about that. Never thought of myself that way. But all is good now. Julie called me her pirate guy just last night, while were having steaks at this great place in Wyoming. I guess being a pirate hottie is good.

3. What are your feelings about this story?

It's about time someone told this story. I really hated abandoning Julie, really hated losing her to Lukas … but well, I guess I never did lose her to Lukas, but that's why Julie is the way she is - being a good friend to everyone but herself. Then there's all the crap Charles and Lacey put on everyone, making them feel like pond scum just 'cause they didn't go around stabbing everyone in the back. I'm so glad those two will never hurt Julie again.

4. How do you feel about being a character in this book?

There I am, taking pics at the Little League World Series in Pennsylvania, and I got this urge to go home to Landry. The final game had just finished, everyone was celebrating, but not me. I booked onto the first flight to Atlanta, grabbed my SUV from where my folks live, and drove up to Landry. Then I had to come up with this lame story about stopping off to say goodbye to everyone before I went to Germany. That totally freaked Julie. Now that I know why, I'll make sure I don't freak her out again. All this means that I absolutely love being a character in this book. I might not have got a chance to be with Julie if I wasn't.

5. What do you see in your future? (No spoilers please!)

Going to college with Julie next winter. Sure, it's fun traveling the country, looking for Reboot locations and getting a ton of pictures for a new show with the two of us, but winter is no joy at all. Besides, I'll have time with her all to myself. Don't get me wrong. Lydie is a nice girl, but she's a fifth wheel when I want time with Julie.

6. Is there another Take Chances in the future? Will you be part of it?

Be kind of hard to do another Take Chances. We took the biggest chance of all, and we beat the odds. Now, I'd rather stick with my photography, some college, and lots of time with Julie.

7. Say a movie producer comes knocking. What actor/actress would you want to play you and why?

I know just the guy. The guy that plays Silas Botwin on Weeds – Hunter Parrish. He'd be perfect as me!

Julie Bond grew up in Europe as a military brat. She found her very first permanent home in Landry, GA as a teen going into high school. Almost four years later, she's having pre-graduation jitters and flashing back to an incident of school violence she experienced in Europe. She attempts to convince herself that it can never happen again, but continually finds herself flashing back to that day no matter how hard she tries.

The people around her present any number of problems for Julie, and she's hard put to keep from drowning under all the issues. Then Michael--a cool guy she's had a crush on for the last three years—returns from traveling the US as a photographer, and Julie now has one more thing to distract her as she prepares to leave high school. One thing she firmly believes in: no one will ever invade her classroom with violence again.

Landry High's walls fade. I again sit at the little table in kindergarten. The door opens. Three men and two women come through it. They have automatic rifles. One shoots into the ceiling. Another shouts. 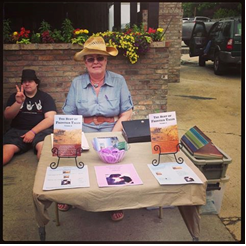 KC Sprayberry started writing young, with a diary followed by an interest in English. Her first experience with publication came when she placed third in a Freedoms Foundation at Valley Forge contest while in the Air Force, but her dedication to writing came after she had her youngest child, now a in his senior year of high school.

Her family lives in Northwest Georgia where she spends her days creating stories about life in the south, and far beyond. More than a dozen of her short stories have appeared in several magazines. Five anthologies feature other short stories, and her young adult novel Softly Say Goodbye, released in 2012. During 2013, more young adult stories have been released: The Ghost Catcher, Who Am I?, Family Curse … Times Two, and Amazon Best Seller, Canoples Investigations Tackles Space Pirates.

You can find her on the web here:


Hello! Here's the day you were waiting for, through Sunday, September 29. You can pick up my other YA coming of age books, Softly Say Goodbye and Who Am I? free on Amazon:

Thank you Sabina Bundgaard of Sabina's Adventures in Reading for hosting me today. Tomorrow you find the next Teaser Tour on K.C. Sprayberry's Out ofControl Characters.